Walk in Boston # 2, the other North End, is a self-guided 2 miles tour in a quiet section of the North End.

You’ll mainly be along the harbor; you’ll meet locals relaxing or playing bocce (when the new courts are finished); you’ll discover the past of the area; you’ll have a chance to buy fresh food at an open-air market (Fri-Sat only); at the indoor market next to it (Wed-Sun); or at a local grocery store.

Good to know: there is free wi-fi along the Greenway; you’ll find plenty of benches, and sometimes tables, everywhere; there’s a public restroom next to the maritime museum or in the middle entrance of the Marriot Long Wharf hotel, and at Faneuil Hall.  Not a lot of places to go eat or have a drink, except at the beginning or the end of the trek; or if you go along Hanover St.

A: Your trek starts at City Hall plaza (see Walk in Boston #1 for details): take the stair on the left of City Hall; if you take the right one, you’ll go to Faneuil Hall/Quincy Market, described in the Walk in Boston # 9 (coming in Spring 2020).

At the bottom of the stair, in front of you and on the other side of the street, the New England Holocaust Memorial: created in 1995 by Stanley Saitowitz, it’s a very powerful work of art. It’s made of six glass towers under which you may walk and read what they symbolize, amid steam rising from underneath.

Take Union St. on the left until Hanover St. on your right.

On Fridays and Saturdays from dawn to dust, you’ll be able to buy the cheapest produce in the city at the historic Haymarket. It’s an open air market said to have started as early a the 1600s, and more officially around 1830. Its name comes from the hay farmers were selling here at the time.

If you have a picnic in mind, small brick and mortar food shops on Blackstone Avenue,  at the end of Hanover St., will allow you to add variety to the fruits and vegetable sold at the market.

Alternatively, the  Boston Public Market, home of local producers, and open from Wed to Sun or 7/7 in summer, will satisfy your needs. Otherwise, wait a little bit until you reach a well stocked Italian grocery shop.

B: Cross now Surface Road toward the Rose Kennedy Greenway,  a good place to eat the food you just bought. You’ll have views of Downtown Boston and a never-ending flow of people. With a bit of luck, you’ll even find  tables and chairs available.

Before 2007, the Greenway was the location of the Central Artery, an elevated highway built to alleviate traffic congestion in the city. When it became obvious it was creating problems of its own, and cutting the city in two, plans to built a tunnel emerged.

The project was nicknamed “the Big Dig”, took ten years of planning and nearly fifteen years of construction; it was the most expensive and technologically challenging highway project in the USA. The result on the surface is now a series of gardens, public art, plazas and tree-lined promenades for all to enjoy.

C: Follow the Greenway toward the sea to see some always changing public art on the right (or on the left depending on the side you took);  then “the Reading Circle” and a metal sculpture just before the Christopher Columbus Waterfront park. It’s not the best part of the trek as it is along a busy road, but you’ll have unique views of downtown Boston to compensate.

D: Once you see the park, take Commercial Street on your left. It’s a large and somewhat austere street, even though it’s lined with trees. You are in a residential section of the North End; you took this street for a mouth-watering convenience store you’ll see at one point. You’ll also find tables and chairs next to it (and they were some on your way to the store). If you go a little further, cross Atlantic St. and enter Sargent’s Wharf, you’ll reach the Harborwalk;  at the end of the parking lot, there will be benches and tables in front of the sea.

The Harborwalk (like the Greenway and the bike paths) is a fairly recent addition to the city history; you can now walk nearly all around Boston by following it (a 40 miles trail).

E: For now, keep walking along this section of it, or take a shortcut by Atlantic St. Your goal: Battery Wharf, named after a failed attempt to make it a shoreline gun emplacement.

Most of the wharfs are now quiet rows of luxury apartments or hotels with panels here and there telling you their history.

At Battery Wharf (if it is open as it’s not always the case), you’ll find a small maritime museum with an observatory deck on the second floor. It will transport you to the time  of whale oil processing and sailing ships building. You’ll realize how busy this part of the North End was at one point.

Next to it, you’ll see Coast Guards ships, some small, some impressively big, with East Boston on the other side of the harbor (see Walk in Boston # 3, coming soon). Here again, some panels will tell you the history of this station, one of the oldest in the USA.

For security reasons, you won’t be able to enter it, so go back to Atlantic Ave; take Battery St. in front of you. Just before reaching Hanover St. on both side of the street, you’ll see unusual religious decorations.

Cross Hanover St. to go and take Charter St., a quiet street with alleys here and there.

At Foster St. turn right and on the other side of Commercial St. you’ll see Mirabella swimming pool. It’s open to everyone in season, fairly cheap, with views of the harbor.

Otherwise, you can also keep walking a little more on Charter St.; then take the stair going down just before Copp’s Hill Terrace.

THE AREA DESCRIBED BELOW IS NOW UNDER RENOVATION UNTIL 2023 so take a left on Commercial Street until you reach, on your right, a passageway along the construction site. It will lead you back to the Harborwalk (see F).

When the renovation is over, on the other side of Commercial St., you should see new tennis courts, baseball rings, and other recreational facilities. If you come at the right time, you’ll even see people playing bocce, an Italian game of balls, and you’ll know for sure you are in the North End “Little Italy”.

F: From the bocce court (once the renovation work is over), you’ll find a path that will bring you back to the Harborwalk.

There (but again, with the renovation work going on, it’s a bit empty!), you’ll see locals strolling along the sea, jogging, or just sitting on benches and talking. There is Charlestown on the other side of the harbor, the SS Constitution and USS Cassim Young at dock, and Bunker Hill on top.

G: It’s also possible that the Harborwalk will be closed toward North Station as there’s also construction work here, this time on the Charlestown bridge. If it’s the case, go back to Commercial St. by turning left after the modern school on your left, instead of going straight on.

Take Commercial St. on your right, then Hull St. or Prince St. (the next one) on your left.

The idea is to follow a few small streets in this non-touristic part of the North End to reach Thacher St; then to turn right to reach Joe Tecce Way; to cross it toward Valenti Way and to take Canal St on the right to go to North Station.

Otherwise (when the pathway under the Charlestown bridge is open again), keep following the Harborwalk.

You’ll go under the Charlestown bridge and its interesting metal structure,  see the Zakim bridge on your right and North station/TD Garden on your left.

It’s easy to find your way to the station, but difficult to explain it, so trust  what you see.

Once at the station, you’ll be at the end of this trek!

However, before you go, don’t forget your guide and see how to thank him at the bottom of the page. Then enjoy the rest of your day! 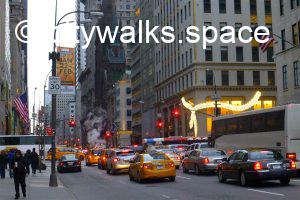